While founding Digital Eggheads, we had a lot of aims, one of which definitely WASN’T being just another mainstream digital marketing agency. Rather, we wanted to be the superheroes for small and medium sized businesses, to help them grow. But for a long time now, we’ve been noticing some boring routine habits which definitely had to be changed. And that, my friends, is what lead to the development of the bot-who-must-not-be-named (We actually haven’t named it yet but it never hurts to create an air of mysteriousness).

A chatbot? But why?

If you know us, you would know we’re big talkers (not empty talkers, that’s a whole different thing). And that easily helps us manage our USP of overseeing client communication. But as Spiderman says, with power comes responsibility, and there came a  point when we realized that we needed a strong resource to help us streamline community management – and as good as humans are in that field, we thought to bring into the market the next best thing.

That was when we started working on developing a Facebook chatbot, initially starting off from the food industry. Now if you ask why that particular industry then, well… We really do love food.

It all started from a conference held by Facebook for Developers in Lahore. Even though chatbots weren’t a new concept; that was the first time I hands on experience of working on the process of bot development, and the idea clicked right away!

While our development process was underway, we thought to try a third party bot for communication. We applied the settings on one of client’s pages to see how it worked, and let’s say the results were hilariously catastrophic. To sum it up, the bot started acting up, and our client panicked.

And as funny that memorable day is, it made us realize that we needed to work on bringing a more efficient bot in the market.

The research phase was probably the most important part of the process, also where I learnt most about the challenges and advantages of the bot’s abilities in community management. To make proper communication base and responses that match the natural way we usually communicate, we chose an existing client as a case study and mapped out multiple flows of communication that are generally followed. The biggest challenge was to make sure that the bot is as efficient as possible so that instead of just being a chat support medium, it could actually help the customer in making a proper decision.

When Do I Get To Try The Bot?

Even though the beta version of the bot is almost ready, there’s a lot more that needs to be worked on, although we’ve taken the first step toward trial and testing. And those wondering when they can get their hands on our precious, you’ll get your chance gradually.

I’m really excited for the future of this bot because this is a considerably new concept, not only in the eatery industry in particular, but in the Pakistani market as a whole. Further on, I plan to make sure that the pilot runs as smoothly as expected, to build a great experience for each user. And after that, obviously, the plan is to use this bot to take over the world!

How can Design Thinking be used in Marketing Agencies?
April 16, 2019Safeer E Hussain 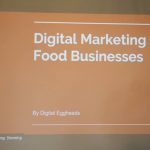